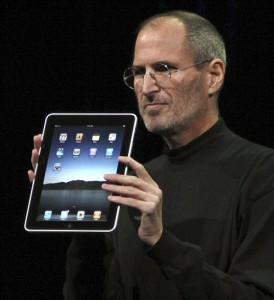 I finally had time to finish watching the keynote of the recent Apple event and here’s a quick summary and review of the event.

First off, remember my predictions? Well, it seems I was wide off what the keynote would cover. Disappointingly, the entire keynote was devoted to the iPad, so nothing about new MBPs, iLife/iWorks or the iPhone. This makes me think that it’s very likely that i5/i7 MBPs would be released sometime in March without a special event (like for the new iMacs and MacBook) while a new iPhone (both hardware and OS) might probably come around WWDC (or maybe the other way around – new iPhone in March and new MBPs in June). As for iLife and iWork, I am not holding my breath – maybe there just isn’t a 2010 version.

But now back to the iPad. First a few basic things – it has a 9.7″ LED display with IPS technology (like the current iMacs), powered by a custom chip made by Apple itself called the A4 and runs the iPhone OS at 1024×768 resolution. It comes in 2 flavors, 1 with just Wifi and another with both Wifi and 3G.

Many people have been proclaiming that the iPad is nothing more than an upsized version of the iPod Touch/iPhone and that it serves no real purpose. Steve Jobs felt that the iPad is meant to fill the gap between the smartphone (the iPhone) and the laptop. 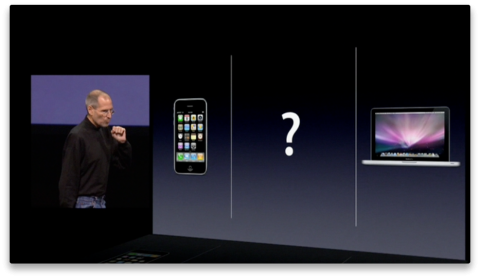 But personally, I saw a different area where the iPad can really shine – when used in combination with a desktop. This is because when it’s paired with a laptop, the laptop can do what it can do more efficiently without a significant decrease in portability. However, for a desktop user, there is a need for a mobile device that offers more power and screen real estate than a smartphone and yet is cheaper than a laptop.

The best thing about the iPad is probably the high resolution, especially when compared to the iPhone. This allows developers to create new interfaces that allows faster access to more features (especially with the popover menus as seen in some of the app demos). Everything that can be done on the iPhone/iPod can be done more efficiently on the iPad and at the same time, new possibilities are possible. For example, word processing on the iPhone using the Quickoffice application is definitely a pain in the ass with all the formatting options hidden in menus and submenus, but with the iPad, you get almost instant access to these options. And that’s why an upsized iPod Touch/iPhone isn’t just literally an upsized iPod Touch/iPhone, but something different altogether.

Next, the iPad version of iWorks is really slick and it would suffice as reason enough to purchase the iPad over a laptop. With the iWorks suite of applications for the iPad, the iPad can do almost anything a laptop can do – web surfing, email, gaming and now word processing, presentations and spreadsheet editing. Sure, it may not be able to multi-task (yet) but the 1 GHz A4 processor should make everything run so fast that it makes almost no difference. The main thing right now is for Apple to come up with a 30 pin to DVI/VGA connector so that we can actually use the iPad to run presentations.

Lastly, the iPad is running the iPhone OS 3.2 right now. This means there’s lots of potential for new features like real multi-tasking etc. when the new iPhone OS 4.0 comes out. A few great features would actually be like being able to use the iWork suite of applications to open and edit documents downloaded from the web or as email attachments and being able for applications to share certain data with each other (using a shared filesystem that is sandboxed, maybe?) All these would greatly enhance the iPad’s productivity and slowly eliminate the need for a laptop.

In conclusion, the iPad definitely cannot replace a full-fledged computer, nor should it aim to do so. Rather, it should try to serve the market that is right now filled with netbooks – a convenient device that is able to perform basic tasks without issues on the go. All along I have advocated a laptop and desktop combination, but right now, with the introduction of the iPad, I believe that the iPhone/iMac/iPad combination would easily serve to meet the increasing demands of professionals that depend heavily on constant connectivity.